The M6100 Broadcast Satellite Modulator is a next generation modulator specifically designed for broadcast, direct-to-home, primary distribution and contribution applications. Featuring the latest Carrier ID technology, the M6100 enables operators to effectively manage satellite transmissions, and easily identify any transmissions that are mistakenly up-linked on the incorrect frequency.

Built upon the latest flexible programmable technology, the M6100 Broadcast Satellite Modulator is a future-proof device, making it easy for any satellite network to evolve to the next level of video delivery efficiency. The M6100 is upgradeable to DVB-S2X, enabling broadcasters and operators to optimize their satellite links for the highest bit-rate capacity and optimum bandwidth utilization.

The M6100 Broadcast Satellite Modulator is fully equipped with all necessary input and output interfaces, offering both ASI and IP transport stream input capabilities as well as IF and L-band output interfaces. In conjunction with full remote control capability, the M6100 can seamlessly integrate into any network and infrastructure. 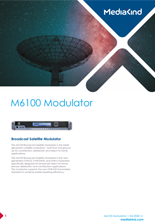 Our mission is to build a media universe that continuously improves the ability of service providers, operators, content owners and broadcasters, to acquire and dynamically deliver high-quality content that transports viewers towards truly extraordinary experiences.

Explore how M6100 Satellite Modulator can help you