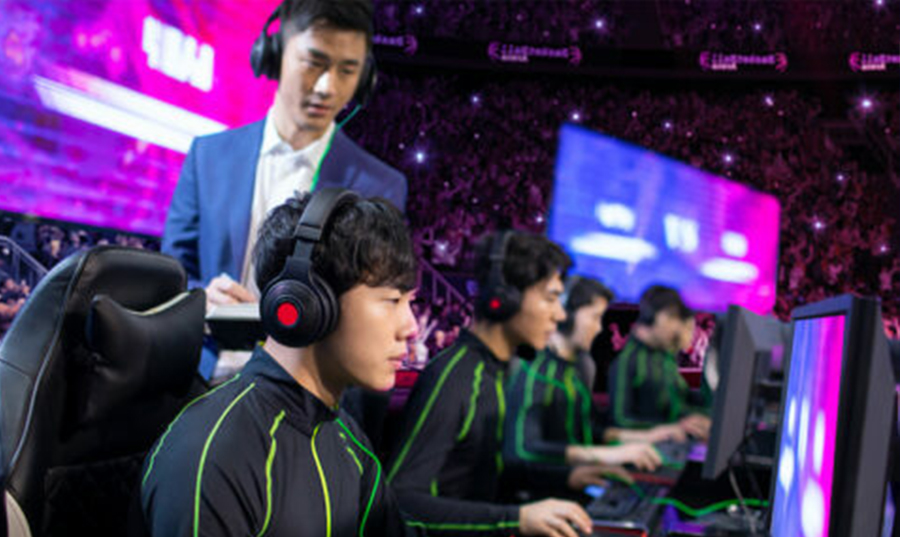 eSports: From niche to mainstream?

Last year at IBC2019, we enabled a live immersive 360-degree video stream featuring two professional ESL teams going head-to-head in the popular game ‘Counter-Strike Global Offensive.’ The feed was then made available via the IBC show app, providing fans with a unique viewpoint and perspective on the game.

We delivered this demonstration because we recognize eSports’ enormous market potential. Video and sports entertainment are now starting to merge. The financial values support this view; a report from ResearchandMarkets.com anticipates the global eSports market will reach $2.4 billion by 2024. eSports competitions are attracting record-breaking audiences year-on-year, with eye-watering prize funds to match. Just this month, Guild Esports IPO, backed by none other than David Beckham (5% ownership), has been listed on the London Stock Exchange for the first time, valued at just over £40 million. Back in 2018, Michael Jordan, the NBA All-Star, led a $26 million round of funding for the eSports ownership group aXiomatic.

Unlike traditional sports, eSports built its presence in streaming, reflecting the demographic of its audience’s viewing tendencies. It is an OTT-first platform, which is why the likes of Twitch are thriving. For the consumer, these platforms provide fantastic free streaming services, offering endless amounts of engaging content. It’s a prime opportunity for advertisers to reach young, predominantly male (81.5%), millennial, and Gen-Z markets, with the opportunity to sell directly to active gaming communities by leveraging the platform’s data-driven, analytical insights. Even luxury brands are starting to recognize the commercial value; last December,  Louis Vuitton built an entire collection around its partnership with League of Legends – selling out within an hour.

The virtual and physical worlds converge!

The crossover effect manifested itself during the lockdown period, where we began to see several eSports events that mimicked real sporting events. When the Premier League paused in April, real Premier League soccer players took part and competed remotely on behalf of their clubs in the ePremier League Invitational FIFA 20 tournament. Broadcasters such as Sky Sports broadcast the tournament live – again helping to attract millennial audiences, notorious for regularly shifting their viewing habits – and maintaining the Premier League brand’s prominence. Doing so was pertinent in a period when competing VOD services were seeing a significant uplift globally.

Another prominent example was NASCAR; back in March, the first eNSACAR race became the most-watched eSports event in history, with 903,000 viewers. In the future, brands such as NASCAR could look to promote its TV app, provide access to an array of games and additional features – designed to bring the NASCAR experience to life in a virtual world. There are opportunities for the music industry too. In April this year, the American rapper Travis Scott delivered an in-game concert performance during a Fortnite game. This resulted in over 12.3 million concurrent players participating live during the joint event.

Delivering a higher level of interactivity and personalization to today’s audiences will, for me, be the way to bring eSports even further into the mainstream, creating exciting crossovers between real and virtual events. By raising eSports’ profile to the casual viewer, traditional broadcasters can gain access to a passionate and broader community of gamers and the chance to build long-term loyalty to their brand. If nothing else, eSports offers an opportunity to experiment with new content on their live channels and provides a real differentiator against the VOD giants such as Netflix and Amazon.

Overcoming the challenges of scalability and latency in eSports

Of course, audiences will only pay for an eSports service if there is a quality user experience to match the on-screen drama. The first challenge revolves around scalability – a massive spike in demand during one particular game – such as the Travis Scott example above – could cause a total outage. eSports is now a highly popular global sport, which means streaming infrastructure must be robust enough to deal with this level of interest at a moment’s notice.

Then there is the issue of latency, which has the potential to ruin any form of gaming experience. For the player, a slow connection could put a competitor several steps behind their opponent. Simultaneously, for the online fan, a friend or fellow gamer spoiling a move or announcing results several seconds ahead of their video stream creates potential frustration. These issues extend to trading and betting; any additional delay will dramatically impact the prices, odds, and legitimacy. And of course, with the growth in remote production and decentralized workflows, the latency question can affect anything from camera control, video and audio mixing, and returning video and audio to a live venue. Ensuring reliable, low latency offerings will be fundamental to the success and future growth of eSports events.

How can MediaKind help?

Since March, MediaKind has been heavily involved in helping our customers and partners implement remote workflows and launch new offerings. Remote production could soon become a significant table stake in eSports tournaments. We believe the distribution of eSports coverage plays into the hands of traditional broadcasters. As eSports increasingly look to create virtual studios, traditional broadcasters will have the necessary tools to help deliver this at scale. By leveraging the availability and reliability of IP connectivity at eSports venues, broadcasters can save on sizeable physical infrastructure costs, while also reducing the cost and environmental impact of transporting people and equipment.

We must view all future encoding as part of a flexible, end-to-end delivery chain. As eSports professionalizes, vendors such as MediaKind can enable sports leagues, federations, and service providers to make significant improvements in processes. By owning the entire encoder processing implementation, there is an opportunity to seamlessly upgrade and integrate more efficient encoding engines without impacting workflows. Through solutions such as Aquila Streaming, we can provide a broadcast-like experience with end-to-end low-latency and innovative TCO optimization that minimizes bandwidth and storage costs.

The new era of empty arenas has shown no hindrance to the enduring popularity of eSports where incredible, unique, immersive experiences are being created, and further transforming how we watch them.  We are now seeing the process of gamification – the transition from watching to playing eSports – happening everywhere. Take this example from HADO in the video below – an augmented reality, high tempo and reimagined version of dodgeball!

We can also see this trend in the way advertisers are showcasing eSports. Last month, Nike launched an advert in China with the gaming legend UZI, to create the fictional ‘CAMP NEXT LEVEL’ – an intense training facility designed to help strengthen gamers’ bodies and minds. Again, this is indicative of the professionalism and training eSports players now undertake.

We are also seeing early movements towards this in traditional sports. The official tracking provider for the NBA and MLS in the US, and the Premier League in England, Second Spectrum, is especially interesting. Its services enable fans to make camera and audio choices, leverage analytics to have key personal insights around the action on the pitch (e.g., the probability of a player scoring from a particular position), and access to other personalized, interactive augmented content.

The continued rise and rise (and rise) of eSports

Through eSports, we are slowly making the transition to an exciting virtual world. In the future, every set of eyes could lay claim to a virtual camera view – as opposed to a physical camera view – with the opportunity to blend in commentary or replays on-demand. Video game engines are now powerful enough to generate any player’s perspective, from any angle, anywhere in the game. We could see different teams competing against one another – such as footage from a gamer’s screen – or even 360-degree, virtual reality rendered footage from inside the game itself.

Increasingly, I think traditional sports will replicate many elements from eSports, particularly in the way that its blending interactivity and virtual effects into the viewing experience. Soon, eSports will be regarded as just another sport rather than a unique entity in itself – completing its evolution from niche to mainstream content.